On Sunday the weather was good enough for some flying on the west coast. So at 11.30am about 8 of us gathered at Kario and the second day of my PG2 had started. 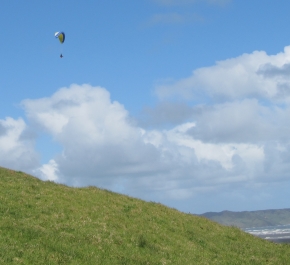 The first thing to notice about the west coast is that it looks amazing, rugged and empty. It seems that with paragliding besides the flying I also get to look out over the amazing landscapes New Zealand has. Double win!

But before I get to fly as a qualified pilot a lot more training has to be had and that we did. The day started off with some ground handling exercises on the really old gliders. My first taste of reverse launching except with out the actual turning around and flying bit. It turns out reverse launching isn't actually as simple as I thought it would be. Having flown kites for many years I thought I would get the reverse launch down pretty easily but when the gliders get larger and the controls are reversed things get difficult. More practise is required ...

After the ground handling a few short flights down the slope were made with a larger glider to practise the forward starts and then it was time to get some actual flights done. I managed to get three short flights in where I got to practise forward starts, turning and then landing. Some observations (which are probably obvious to those that have flown paragliders before): 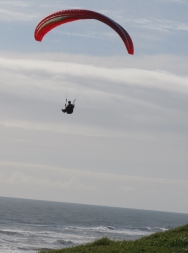 And then it was time for the unexpected highlight of the day. When I paid for the PG2 course I paid for a combination package, which includes the PG2 course, a glider and a harness. Now I still haven't selected a harness but I have selected the glider, a bright red Gin Atlas. I didn't expect to be able to fly it so soon in my course but after my initial three flights both instructors gave me the go ahead to fly it.

I managed a further two flights with it. The first one was a nice long soaring flight where I got to get a feel for the glider. At the end of the flight I managed to get quite a bit of height. And to top that flight off the instructor guided me in for a top landing upon which I nearly broke my glider by stuffing up the landing. Fortunately no gliders or pilots where hurt.

The last flight of the day was back down to the beach to pack our equipment and drive home. I set myself up for a landing approach and promptly overshot my selected landing spot by about 100 meters or so. I guess selecting and landing in the right spot is yet another skill I have to work on.

All in all it was an amazing day of flying, especially the nice soaring flight on my shiny new glider.