A little while ago I signed up for a PG2 paragliding course with Wings and Waves. Unfortunately I signed up just before winter crept in and made it impossible to fly. As we are moving towards spring the weather has been getting better and last Sunday the weather was good enough for us (my girlfriend and me) to have our first shot at flying a paraglider. 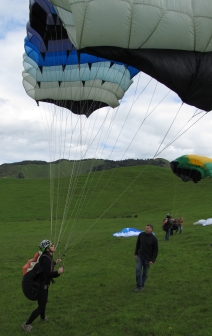 So on Sunday morning we met up with the Wings and Waves crew and drove over to a nice, if some what soggy, hill somewhere around Pukemore, south of the Bombay hills for the first steps of our training. 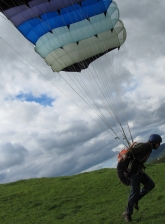 Once we got the hang of the ground handling we started learning forwards starts, or alpine starts. With this method of starting you face forward with the glider behind you. Once you have sorted out the lines you move forwards until the lines are tensioned and then you run at a constant pace. The first glider we used was the really old one we used in ground handling. Given that it was not very large it was pretty easy to run with, and running we did, lots of it.

Once we got a few good runs in with the old glider the instructor found us a more modern paraglider to play with. This one was considerably larger and far more interesting. Over the remainder of the day we slowly worked our way up the hill, starting from a higher position each time, and being rewarded with a little more flight time and a little more height each time. 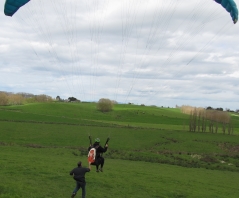 In the beginning both my girl friend and me got to use the same glider but it turns out I've got a big fat ass and so I had to upgrade to bigger gliders a few more times. Each time being reminded that bigger gliders also mean more backwards pull on start and higher flights.

In all it was a good day flying. I still have a lot of work to do on all parts of my launching and flying skills (obviously given that this is the first time), but the one thing I really noticed I need to work on is distance estimation and flare timing. I got that wrong a few times and it was fortunate that the landing area was soggy because it made for nice, if what splashy, landings even if I miscalculated my flare timing.

All in all a good time was had by all and we are definitely keen for more flying. Hopefully with less running and more flying next time.

« Why this blog was created Sherlock release - V0.4.0.1 »
comments powered by Disqus